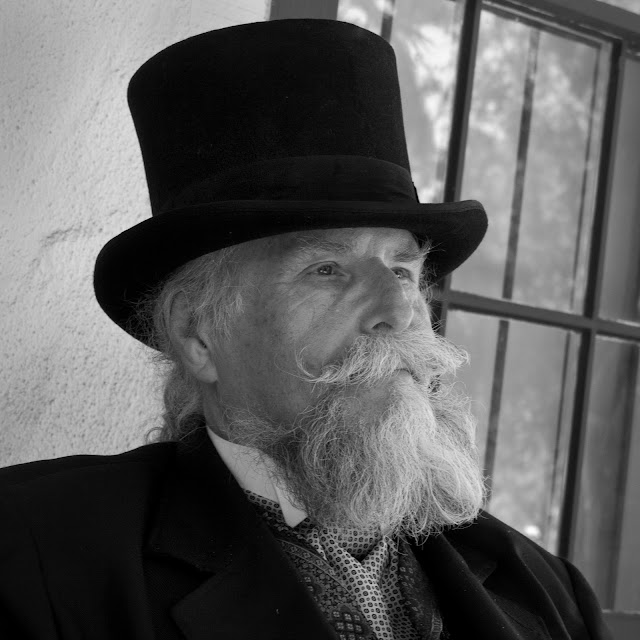 I met Ivan while he was waiting to participate in a re-enactment at Rancho Domingez. Not only does Ivan make a great 19th century lawyer, but he says that he also makes for a really good pirate and in doing so over the years, he's a little hard of hearing from canon fire. Ivan is a re-enactment actor. If he does anything else for a living, he was keeping it a secret. When I approached him about taking his picture, it took me a few minutes to get him 'out of character' to get his real name.

My original intention was to take his picture, get his contact information and send it all off to a friend who I thought would be interested in taking Ivan's portrait — see links below, Ken Merfeld. I'm not sure if Ken ever contacted Ivan, but I have this image of him and I think Ivan looks magnificent in his top hat, stiff collar, ascot and that grand beard.

An omission about my shot of Ivan. I photographed Ivan before I photographed Felix, so 2 of 100 is a little lie; he's more like a beta version of the 'strangers' undertaking. However, this is a shot of a stranger and I want to include Ivan in the series.

You can stop at 100 if you want. I guess there are about 30 million strangers, right here in California! So, if you get hopped up on this...

I have a backlog of 'strangers' shots that could hurtle this project into the low double digits. However, I'll try to resist the temptation to add them in at this or any future point. Onward.

That said, this project is an attempt to see this work with different eyes and to lend an ear. Find out something about these folks. Everyone has a story, I'd like to tell a few of them.